In it to win it! When it comes to her workouts, Kim Kardashian doesn’t take it easy — and neither does her trainer, Melissa Alcantara, who exclusively tells Us Weekly how she motivates the star.

“I like to work out with her sometimes. I feel like that gets her into it and she sees that I’m working just as hard as she is,” Alcantara told Us Thursday, January 4 at the Create & Cultivate 100 Launch event presented by Chevrolet in L.A. “We’re both up at 6 o’clock in the morning and I’m like, ‘Listen, if you’re gonna die, I’m gonna die, we’re both gonna die.’ That’s how we get through it every day.” 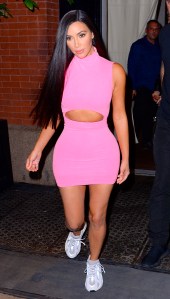 The Keeping Up With the Kardashians star — who recently worked out with the flu — frequently posts their intense gym sessions on her Instagram stories. On Tuesday, January 29, the KKW beauty mogul showed their 6 a.m. quads workout, featuring four sets of close-stance leg presses (30 reps each), four reps of 20 quad squats and dynamic jump squats.

Every Diet Trend Kourtney Kardashian Has Ever Tried: From Apple Cider Vinegar to Intermittent Fasting to Vitamix Smoothies

Mornings are the 38-year-old’s favorite time to get in her fitness routine. “She loves it,” the pro tells Us of their early sessions. “Sometimes we have to work out in the afternoon and she’s like, ‘Ugh!’ You know? In the morning she’s up, she’s with it, she knows what’s gonna happen and it’s literally obviously the first thing she does in the day, and the rest of her day just goes smoothly.”

And though Kardashian — who found the bodybuilder on Instagram after Alcantara’s own weight loss — is a star pupil, that doesn’t mean she loves every training exercise they do. “There’s one ab move that she hates,” reveals her pro. “It’s something with a medicine ball and maybe she’ll show it one day on Instagram, but she despises it.”

The incredibly fit Alcantara competed on NBC’s The Titan Games hosted by Dwayne “The Rock” Johnson earlier this month, winning her challenge. Her performance compelled The Rock to tweet of the star on January 10, “You’re a champ and inspiration to everyone who witnessed your incredible performance tonight. Including myself.”

What’s for Breakfast: Healthy Stars Like Jenna Dewan and Heidi Klum Tell Us What They Really Eat Every Morning

Besides getting through her sessions with some inspirational teamwork from Alcantara, Kardashian has a motivational playlist on her side — featuring her husband Kanye West’s music. “She does [work out to them]!” Alcantara says of West’s songs. “She knows all of his lyrics, but we listen to everything.”